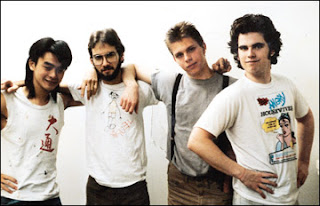 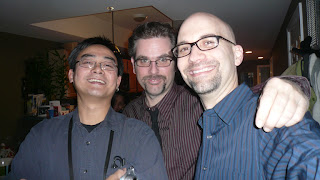 I had a fun but mellow time New Years Eve. Me and my moustache went to Jersey City to attend a party given by my friend Miggy and his girlfriend. I got there at 8:30, and was one of the last ones to arrive. A group of about twelve were there of which I only knew the hosts.

There was a fine spread set up and some decent beer for me to exchange with the Sam Adams I brought.

The focus of the party was the participation with the Wii video game system. Wii is the Twister of the video systems. It actually involves some exercise. I haven't had any video system since the Atari 2600. I'm just not into video games on home systems, So I didn't play Wii until there was a need for an opponent for another player. I was actually winning playing tennis when another old friend Sean arrived with his two young sons. He bragged about his sons' prowess at the system.

Well, I showed his younger son, Justin what I was made of when I beat him at tennis only to has his older brother Ian bring me back to my humble origins. 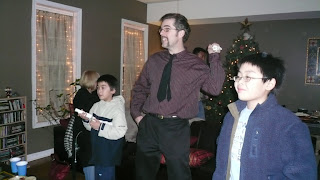 The rest of the night was spent talking to Miguel's apartment mates including an attractive woman who looked like Rosario Dawson. Miguel showed us his more up to date animation project that was coming along quite well.

I went back to Wii to fail miserably at Guitar Hero. I knew playing it that I would never have ever been able to guitar for real if I had ever taken it up seriously. 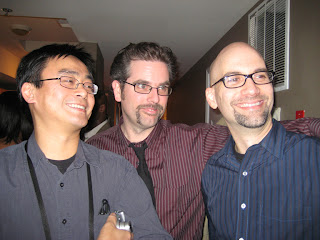 I got home at past 4 in the morning where I spent only the second day off I had since the day I got into my car accident, walking around the neighborhoods of Atlantic Highlands.

By the way, when I talked to my mom it turns out she too played Wii at a New Year's gathering. This is a woman who just turned 70.

Remarkable.
Posted by Scanman at 8:40 PM

Glad ya had fun on New Year's Eve, Scan. Thanks for posting the photos. It's always good to see new pics of the P.I.C. gang. :)

We no longer wear white t-shirts!!